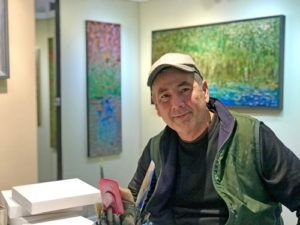 Adolfo Girala grew up in Cuba in the 1970s and spent much of his youth playing on the beach. At the time, art was the furthest thing on his mind. It wasn’t until later in life that he had the desire to explore his creativity.

While working as a computer repairman, Adolfo started painting little pots in his spare time. He eventually started painting on canvas and found joy in pushing the limits of his creativity. Painting has also doubled as a means of self-discovery and exploration for him, which has only continued to fuel his passion.

“I’ve been a full-time artist since 2000, and I’ve never worked so much in my life,” Adolfo says. “I love what I do and I am committed to creating the best possible art I can produce.”

Adolfo’s acrylics and mixed media artwork have gained traction over the years, with people from all over the world gravitating toward the beauty and tranquility of his pieces.

“Each piece has its unique thing going on,” he says. “There are no secrets. It’s just a matter of working with what you have and being in the moment.”

While everything he creates is different, there are some themes that remain constant –– namely what inspires his color palette. Adolfo is influenced by his surroundings, which have a direct link to the art he produces. He resides most of the year in Southern California, where he finds himself drawn to many shades of blue.

“When I come to Arizona, things change for me because I’m in the desert,” he says. “I start painting more greens and oranges. It’s fun to get energized by the desert, which is beautiful and has amazing soft colors.”

Another theme that influences Adolfo is time. He says he doesn’t know what will happen in the future, so he focuses on being grateful for what’s happening now.

“Time goes very fast so I try to seize the moment because this will not come again,” Adolfo says. “I live day by day and let things unfold as they should.”

The Celebration of Fine Art is the perfect destination for Adolfo to focus on his work and being present. The show allows him to dig deep and embrace the energy of 100 fellow artists all creating at one time under 40,000 square feet of tent space.

“You feel part of this incredible movement,” he says. “But it’s not an easy show to do –– it’s very complex. It’s not just about creating art and communicating with visitors, but also working with your inner thoughts. It’s pretty incredible because it makes you a better artist and better human being.”

For more of Adolfo’s story, watch the video below:

Evoking Peace and Calm Through the Beauty of Still LifesEngineering a One-of-a-Kind Technique for Weaving Glass
Adolfo Girala
March 27, 2020in Celebrating Art