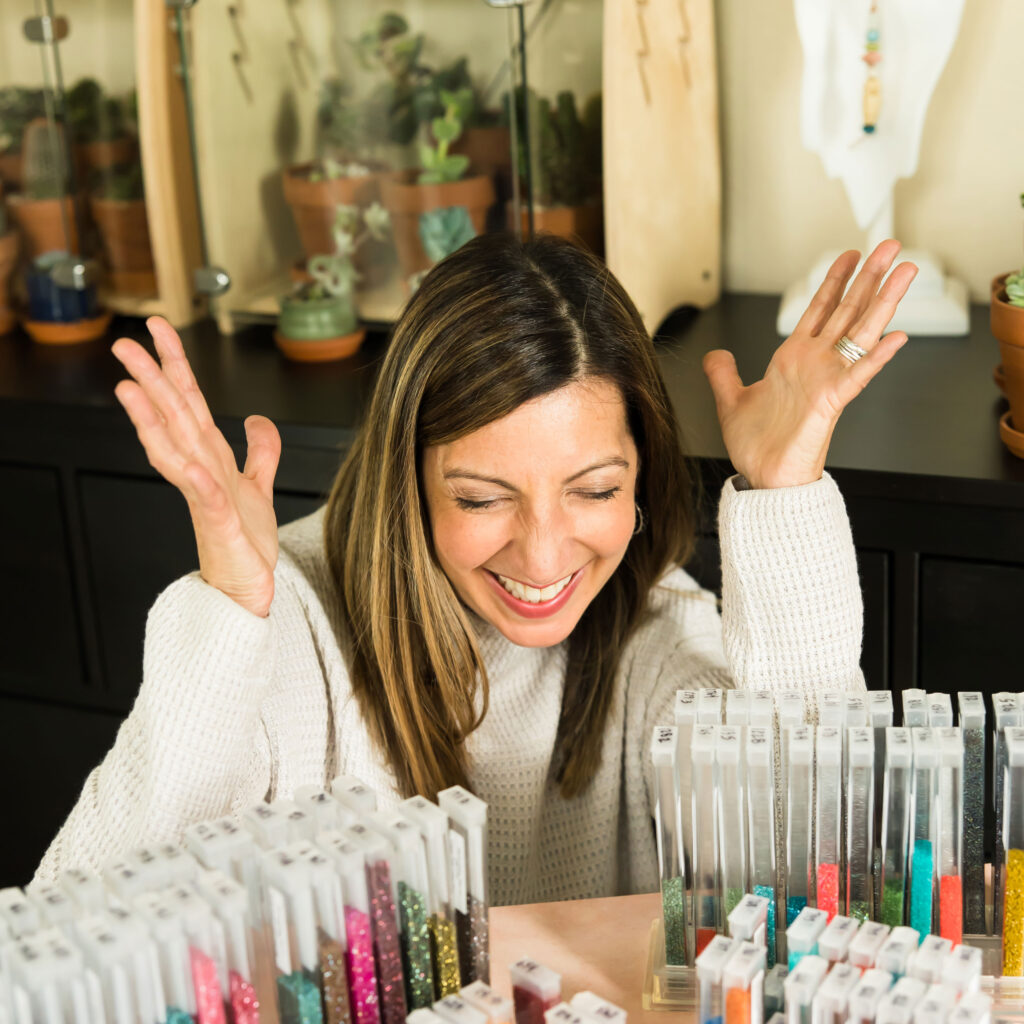 For artist Diana Ferguson, beaded jewelry represents much more than wearable fashion. It’s sculpture, architecture and adornment that can evoke a personal sense of expression and creativity. And Diane finds her own sense of expression, and freedom, in the creation of each of her pieces.

Though she’s always been a creative soul, Diana didn’t explore art as a full-time career until later in life. Her interest in beads, however, was seeded decades prior and she spent years studying and teaching herself various off-loom beading techniques. But it wasn’t until Diana discovered the contemporary geometric beadwork movement that she began to see the potential for volumetrics and architecture in her beadwork creations. That “aha” moment opened a new world of possibilities for her.

She continues to push the limits and explore new concepts through her work––which isn’t limited to beads. But no matter what technique she’s using or type of jewelry she’s creating, Diana is zeroed in on thinking outside the proverbial box and strives to create pieces that enable others to stoke the flame of their own creative spirits.

Read on or watch the video below to get a closer look into Diana’s beaded masterpieces.

I think from childhood. I was a creative soul, but I didn’t really direct it towards art. I just knew that I wanted to do something different. Only when I was in college, did I start to realize I had some artistic capabilities, and it kind of went from there. I only became a full-time artist much later.

I’d been interested in beads of all sorts since I was in my early 20s. My mother-in-law went to an antique store and she bought me all of these beautiful beads and I just loved them so much. At one point, I picked up a book called Creative Bead Weaving and it was all about off-loom beading techniques. I started to teach myself the techniques such as square stitch and right-angle weave and eventually landed on the peyote stitch, which is a very traditional stitch. It’s very flexible and allows me to create structures and do different kinds of volumetrics and architectural types of pieces.

What do you love most about creating art?

I love the serendipity of it the unexpected surprises of how things come together. I like the process too. I’m very process-oriented, so I enjoy beadwork. It’s one bead at a time. It’s a slow patient process. Some say tedious, I say meditative. I like that process of getting in your head and just focusing on the work and seeing what comes out.

What challenges you the most about your work?

I often feel that I don’t have enough time for all of the ideas that I’d like to explore. I’m trying to do as much as I can and not get boxed into one thing and just keep moving forward.

How has your work evolved?

When I first started working with beads, I worked flat. I made flat pieces almost like a piece of glass fabric. Then as I was introduced to the contemporary geometric beadwork movement and the idea that you could use peyote stitch to create architecture. At that point, it was like the gates flew open. I really embraced that. It’s been my focus ever since. I create much more complex structures now with very little use of any kind of charting. It’s much more free form and working out of my mind. I like to think of my beaded jewelry as sculptures that you can wear. If you are not wearing it, you can display it in some manner.

What do you hope your work inspires in others?

I want people to feel that they’re wearing something both beautiful and creative and that it brings out an individual’s creative self. It’s adornment and I love the idea that you can creatively adorn yourself and express your own creativity through what you’re wearing.

I love the Celebration of Fine Art. I’ve been participating for a number of years. It’s a great community of artists and a great community of patrons. It’s just so inspiring to work with other people, like myself, who are doing art for a living. I just can’t say enough good things about it. I really pick up a lot of energy from participating and I think that translates into my work.

Meet the Artist: Gregory Sievers Strives to Evoke Joy Through RomanticismMeet the Artist: Elizabeth Butler’s Art is an Endeavor of Exploration and Evolution
diana fergusonmeet the artist
April 18, 2022in Blog