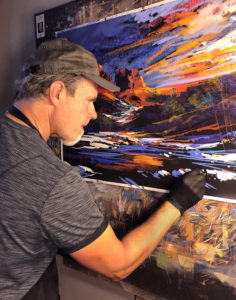 Michael McKee is a pastel artist from Cleveland who now calls Arizona home. And while today he’s known for jaw-dropping abstract and landscape pastels that are bursting with bright colors, it wasn’t always his medium.

Michael’s introduction to art was at six years old –– an interest that was fostered by musically inclined parents who appreciated the arts. Once Michael began taking drawing classes, he was hooked. Eventually he attended the Art Institute of Pittsburgh and built a career as an illustrator, graphic designer and creative director.

“About 20 years ago, I picked up pastels and fell in love with their tactile quality,” Michael says. “This is nothing like my illustration days, but I fell in love with bold color and trying to create motion and movement inside of landscapes.”

Michael uses soft pastel on sanded ground, which gives an interesting tooth and texture to grip the pigment. After spending so many years in the commercial space, he relishes the opportunity to unleash his creativity with this medium and see where it takes him.

“All of my pieces have big, bold strokes in them so it feels like there’s movement,” Michael says. “Some of them have more geometry while some are more organic and circular.”

Although you’d think that, as a landscape artist, Michael would paint en plein air, he prefers to paint from memory in the controlled environment of his studio.

“My colors are the highest colors in nature,” he says. “But they never show up all at once in nature, so I create that in the studio more effectively.”

Inspired by the world around him, Michael’s works celebrate the beauty and energy of his surroundings. He gets into the zone by tapping into his roots: music. Coming from a highly musical family, he turns to this artform to give him extra pep and momentum while hard at work.

“Jazz was my background and there’s improvisation in that, and with my landscapes and abstracts, I think improvisationally,” he says. “I’m always listening to music. Sometimes classical, sometimes jazz or high energy pop. But it’s always about rhythm and where that goes.”

He feels that same liveliness and joy from the use of color. And he’s not alone. Michael says when people stop by his studio, his lush color palette is among the first things they comment on. Having opportunities like these for face-to-face conversations is one of his favorite parts of the Celebration of Fine Art.

“Patrons have the opportunity to talk with artists and see how they’re working,” Michael says. “We also get a lot of amateur artists observing and learning from professional artists in a low pressure way.”

See more of Michael’s story below: