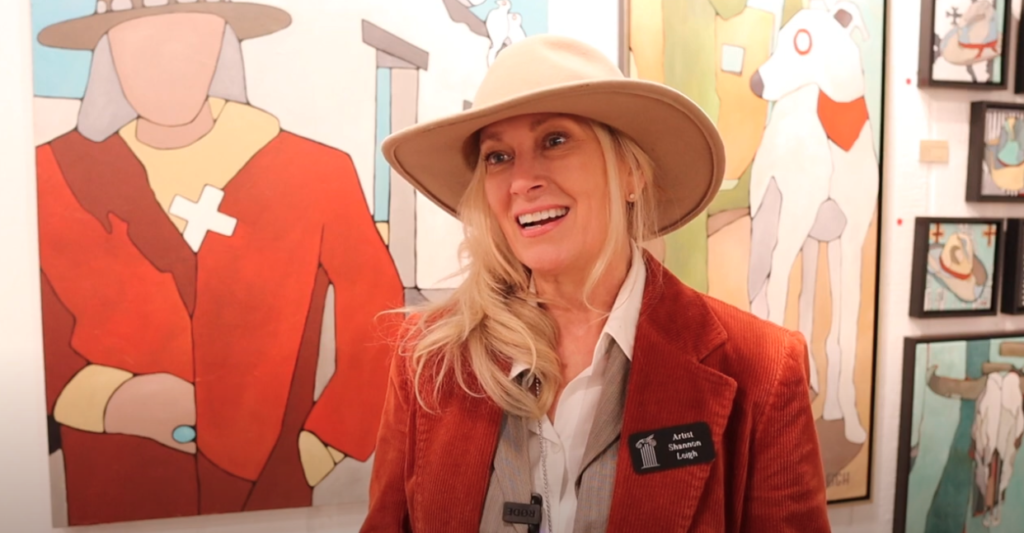 The red circle symbolizes many things to many people. For some, it represents power, manifestation and creation. In Native American culture, red ochre circles around the eyes often indicated war paint. In Japan, the hollow red circle indicates something being complete, similar to a checkmark. Indeed, this symbol can evoke different meanings and truths for different people, and that’s exactly what Shannon Leigh aims to achieve in each of her pieces––many of which feature a red circle.

Shannon’s interest in the arts began at a young age. At just 10-years-old she was winning awards for her work and began selling her pieces in high school. But for Shannon, it’s never been about the awards. For her, the most exciting part about creating is the connection and truth it sparks in others. When she achieves that, she considers the work a win.

Read on or watch the video below for more of Shannon’s story.

My mother has a degree in fashion design and when I was a little toddler, she made all my clothes and her clothes. And watching her work and seeing what could be done with our hands…that was my first indication that it was possible. I went on to be recognized for things that I created, and it was about my senior year of high school when I really realized that this was what I was going to do. I didn’t go to lunch…I was always in the art department creating.

What do you love most about the act of creating?

My favorite thing about what I do is connecting with people. Creating is a process that happens in my studio, but where it ends up is the most exciting part. Sometimes I don’t know where the ideas come from, but I’m hoping that I’m eliciting some truth in the paintings. And I find that when I connect with a person who says, “That reminds me of my father,” or “Those remind me of a memory,” then I think I delivered.

What inspires your work?

I spent 16 years in the songwriting community in Nashville, and one of the sayings that they had was “To make a hit song, you need three chords and a truth,” and it’s so simple. So, how can I evoke that in my paintings? In my work, my colors are simple, my lines are simple, but I hope that my collectors find them honest.

I was called. I didn’t know I was going to be here until six weeks before the doors opened, but through a series of meeting people and through a cancellation that happened here, it was the right time and the right place. And I took it. I went for it and it’s been the most remarkable experience. If you haven’t been, you’ve got to come down and see the quality of the artwork that’s here. It’s mind blowing and the interaction that you’ll have with the artists who are live painting, the interactions that you’ll have, the conversations with the artists, it’s all magical.