Preserving a 50-Year Gift of Love

Kathryn Carole Ellison began writing poetry for her children in the 1970s. It started simply enough––one new poem each day of Advent. Through these poems, she passed along life lessons and words of wisdom to help them make good life decisions, trust their inner knowing and engage in life in a meaningful way.

That first year started a tradition that would continue more than 50 years and 900 poems later. In fact, though Kathryn’s two children are well into adulthood, they still look forward to her inspirational poems.

“Every year they would get 24 poems each and they liked them so much they said, ‘Keep writing them, mom,’” Kathryn said. “Now they’re in their fifties, and I’m still writing Advent poems to them.”

Preserving the poems and pursuing a passion

Over the years, Kathryn amassed a collection of these poems, but it wasn’t until her second husband passed away from Alzheimer’s that she decided it was time to share these joy-filled messages with the world. In 2014, at the age of 75, she began that journey.

“Once I made up my mind to do that, everyone I needed to meet to make that happen, entered my life,” she said. “Now I have 15 books.”

Beyond the beautiful messages shared in her books, Kathryn also wants to be an example that it’s never too late to pursue one’s dreams. In fact, she lives by the inspirational mantra, “you can be old at 30, or young at 90––that’s all up to us.”

Celebrating the journey through art

In 2021, after a fateful stroll through the Celebration of Fine Art, she met artist Barbara Rudolph who specializes in realism oil paintings. It was kismet. 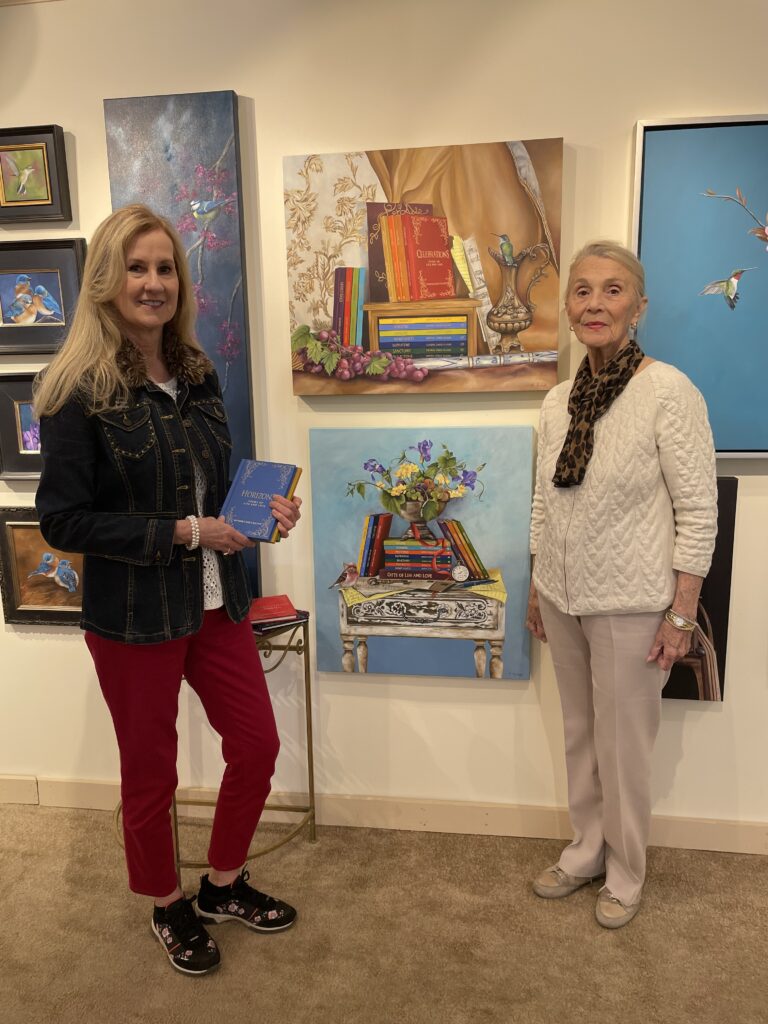 Like Kathryn, Barbara aims to uplift the human spirit through her work and infuse the element of storytelling, but through a different medium. That caught Kathryn’s attention.

“I had a piece in my studio that caught her eye,” Barbara said. “She liked the look and feel, but wanted a piece that showed her books.”

Kathryn asked Barbara to create two custom pieces for her using her books in a still-life setting. She saw it as a way of further preserving the story of her poetry and the journey of eventually publishing the pieces into a collection of books. What resulted was the story of Kathryn’s life as told through oil paint and brush strokes. These stories on canvas will eventually be passed on to Kathryn’s two children, just as she has passed along her wisdom through her poems.

“It becomes a part of you when you’re working on a commission like this,” Barbara said. “I read the poetry, which is so inspiring and I’m so excited for her to hang these in her home.” 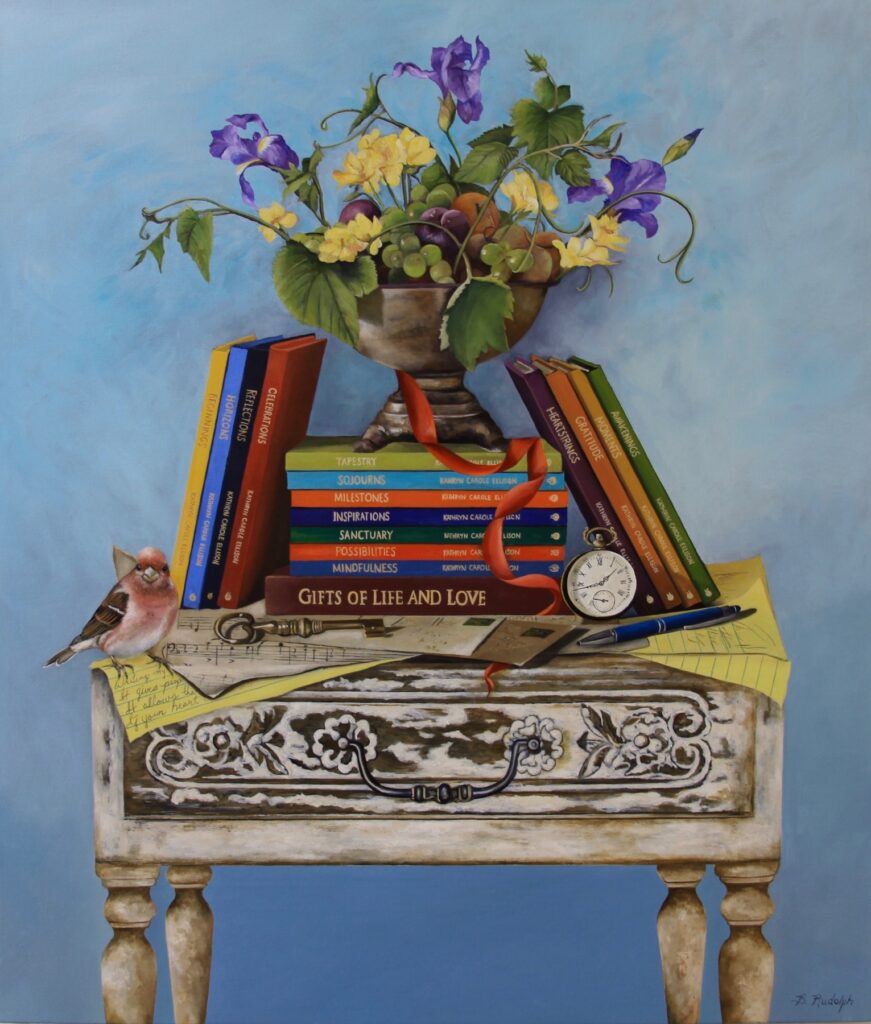 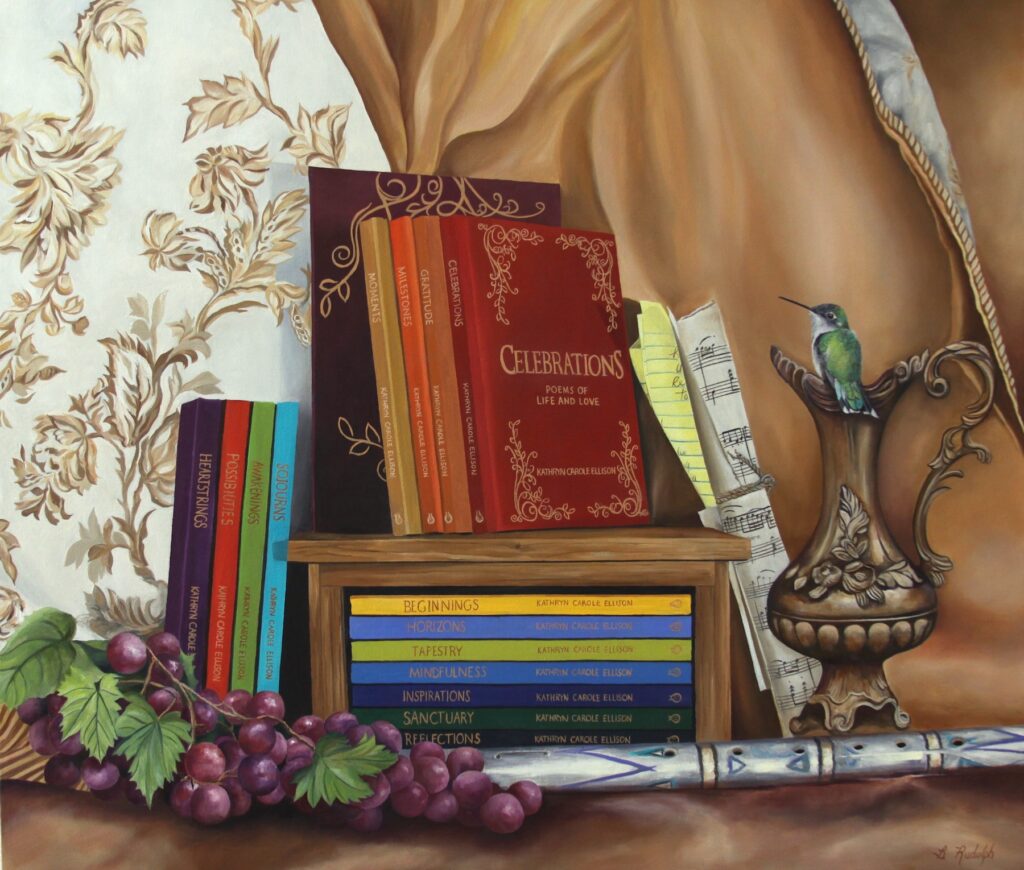