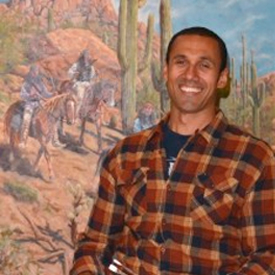 When he was in third grade, James Ayers received an assignment that would foreshadow his future career as an artist. At the time, the holidays were just around the corner so his teacher tasked his class to draw Santa Claus. What James soon realized was that his Santa came out markedly better than everyone else’s––including his teacher’s!

James’ natural talent had come to light, and it wasn’t long before his friends and fellow students began making drawing requests. James found the process of sketching and creating art to be challenging and fun, so he kept at it, gradually getting better as time went on.

“In high school, I took all of the art classes I could,” James says. “During my junior and senior years, I started wondering what I was going to do for a career. My brother suggested illustration or graphic design, so I applied to the Rhode Island School of Design and got in!”

Once he started at this prestigious school, James decided to take full advantage of the course offerings. Eventually, he turned to painting and connected so much with the medium that he focused a major college project on creating a series of portraits of indigenous people. This project proved to be another pivotal moment in his creative journey, foreshadowing the future he would have as the world-renowned artist he is today.

“I thought if I was going to be doing this work in school, I might as well go out in the real world and see if I could turn this into a career,” James says. “I started painting Native Americans and was really interested in hunter-gatherer societies. This was before the internet so, to do research, I would find images from National Geographic Magazine.”

James’ research soon moved from the pages of magazines to reservations across the United States, which began with a trip he took from Maine to Arizona. He traveled from reservation to reservation spending months at a time –– or in one case on a Hopi reservation, two years –– living with different people in their homes on the reservations and learning all he could about their culture and history.

“This is a really heavy subject matter because you’re painting a people who have endured genicide and ethnic cleansing,” James says. “I always focus on being authentic and respectful so the pieces convey honor. There’s no caricature of culture –– I’m trying to depict history.”

James’ oil paintings of Native American lifeways are heralded for their historically correct and authentic accounts. His deep knowledge and research on the subject matter ensures even the smallest details, from the weapons depicted to the plait of a man’s hair, is grounded in fact.   Now that he’s back at the Celebration of Fine Art, he’s eager to share this knowledge with others –– much to the delight of Celebration of Fine Art’s visitors and fellow artists.

“The camaraderie here is unique –– there’s a hundred artists, so we share experiences, trade ideas and inspire one another,” he says. “I’ve seen the whole market change. With the internet, people can find artists now. But here, artists can be visible and able to connect one-on-one. And we can hang out with patrons. We value that.”

Showcasing the Beauty of Nature With an Unexpected MediumCapturing a Sense of Mystery Through Fine Art Photography
oil paintingJames Ayersnative american art
February 10, 2020in Blog