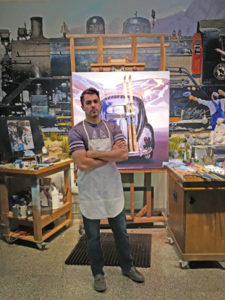 Artists can never be sure when inspiration might strike –– or at what age. For Santiago Michalek, it happened when he was just a child spending time with his grandfather.

“He used to draw these really terrible stick drawings of horses, and I thought they were incredible because I was three or four years old,” Santiago says. “All I wanted to do was paint and draw like my grandpa.”

As a youngster, horses remained Santiago’s primary subject matter. He’d rip out pages from magazines and check out books from the library when they had horses on the cover. But it didn’t take long for him to realize he needed to branch out and expand upon what he could draw.

“I realized in order for it to become a good drawing, it can’t just be a good horse, for example,” he says. “There’s a guy who is going to ride the horse. There might be chickens by it. I needed to be good at drawing all those things.”

It wasn’t until his early 30s that Santiago, who’d now been creating art most of his life, decided to pursue formal training. He attended the Bridge Academy of Art in Provo, Utah, which was run by four full-time professional artists. Santiago says he was the first one to class and the last to leave, always hungry for the insights his instructors provided. The curriculum not only focused on the technical aspects of painting, but also what it takes running a business as an artist.

“The business side was huge,” he says. “They understood how to sell art, since that’s the part everyone gets stuck on.”

By that point, Santiago knew he was serious about dedicating his life to art. He spent time doing portraits, figurative pieces and nudes. But as chance would have it, he’d also picked up a new hobby: restoring Volkswagens. After painting one, and seeing the immediate response from visitors at his studio, something clicked.

“I painted one of my Volkswagens and there was such a different response,” he says. “The brushwork was the same, the compositions were the same –– it was all me. But people’s responses were emotional and visceral.”

He says people would see the painting and share memories of their old Volkswagens. They would talk about the smells, the trips they took in them and how old they were at the time. Santiago said it was a lightbulb moment to continue painting a subject that inspired sincere connections with people, which is why he often chooses to paint modes of transportation.

Being able to share those emotions and memories with people is deeply fulfilling for Santiago and is one reason why he values being a part of the Celebration of Fine Art. He likens it to his dream of traveling back in time to meet Norman Rockwell, and to see his studio and watch him paint. He imagines what it would be like to discuss the work with him and have a genuine conversation. It makes him glad he participates in a show that connects artists and art lovers face-to-face.

“That’s what happens here,” he says. “People come and watch us paint, watch us sculpt, they see the art being created and get to meet the artists, which is fun. It’s something completely different.”

See more of Santiago’s story below: