“What you leave behind is not what is engraved in stone monuments, but what is woven into the lives of others.” —Pericles

For Bryce Pettit, Ryan Schmidt and Todd Paxton, three sculptors who create large-scale works for public and private installation, it is the opportunity to leave a positive imprint on a community that draws them to create monumental installations.

As Bryce Pettit points out, it is not the ease of large-scale sculpture that appeals to him. The process of creating these large works is often difficult, both physically and emotionally. He says, “When you do monumental sculptures, they’re so difficult. The physicality of sculpting it—I’m exhausted every day that I work on these big pieces.”

Instead, these artists do it for the love of the work and its inherent power. For Ryan Schmidt, he has been captivated by monumental sculptures and architecture since childhood. He remembers seeing the St. Louis arch as a child and being awestruck. As a young artist, he returned to the site and was granted a tour of the arch. “It’s 630 feet tall and the width is just the same as the height. So the two legs are 630 feet apart, and if they were off by 1/64th of an inch, the piece wouldn’t line up.”

For him, part of the allure of the large-scale works is this need for precision and a collaborative effort between artists, engineers, and craftspeople to make the pieces come together.

Todd Paxton is drawn to monumental installations simply because he thrives on going big. “I love big. It’s so impressive.”

In 2018, Todd took “big” to a new level at the Celebration of Fine Art, completing an 8-and-a-half-foot Crow Warrior sculpture. It was a big risk, but Todd is not one to ask for permission. And his persistence paid off. Several of these sculptures now dot landscapes across the country, powerfully impacting those who encounter them. 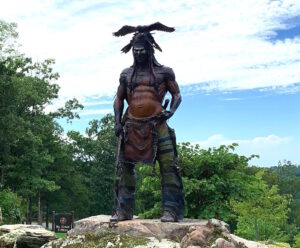 For each of these artists, that’s really the ultimate goal –– to create public art that becomes a part of the fabric of the surrounding community. “Once you put it out there, into the community, it no longer belongs to you solely,” Bryce says. “It is part of them. When the community and the town and the place owns it, you don’t get to decide exactly how it’s presented and interpreted. You’ve now changed the place.”

This point also speaks to the other beauty of monumental installations: the art is accessible to all. “Many times art is for a select group of people that can afford to buy it,” Bryce says. “But when it’s in a public space or a park,.everybody is able to participate and love and interact with that sculpture.” And for artists looking to speak to a community about the interplay between art, humanity, and nature, there is no greater gift than inviting a broader audience to engage in that dialogue.